The CIA and the Media: 50 Historical Facts the World Needs to Know

Since the end of World War Two the Central Intelligence Agency has been a major force in US and foreign news media, exerting considerable influence over what the public sees, hears and reads on a regular basis. CIA publicists and journalists alike will assert they have few, if any, relationships, yet the seldom acknowledged history of their intimate collaboration indicates a far different story–indeed, one that media historians are reluctant to examine.

When seriously practiced, the journalistic profession involves gathering information concerning individuals, locales, events, and issues. In theory such information informs people about their world, thereby strengthening “democracy.” This is exactly the reason why news organizations and individual journalists are tapped as assets by intelligence agencies and, as German the experiences of journalist Udo Ulfkotte (entry 47 below) suggest, this practice is at least as widespread today as it was at the height of the Cold War.

Consider the coverups of election fraud in 2000 and 2004, the events of September 11, 2001, the invasions Afghanistan and Iraq, the destabilization of Syria, and the creation of “ISIS.” These are among the most significant events in recent world history, and yet they are also those much of the American public is wholly ignorant of. In an era where information and communication technologies are ubiquitous, prompting many to harbor the illusion of being well-informed, one must ask why this condition persists.

Further, why do prominent US journalists routinely fail to question other deep events that shape America’s tragic history over the past half century, such as the political assassinations of the 1960s, or the central role played by the CIA in international drug trafficking?

Popular and academic commentators have suggested various reasons for the almost universal failure of mainstream journalism in these areas, including newsroom sociology, advertising pressure, monopoly ownership, news organizations’ heavy reliance on “official” sources, and journalists’ simple quest for career advancement. There is also, no doubt, the influence of professional public relations maneuvers. Yet such a broad conspiracy of silence suggests another province of deception examined far too infrequently—specifically the CIA and similar intelligence agencies’ continued involvement in the news media to mold thought and opinion in ways scarcely imagined by the lay public.

The following historical and contemporary facts–by no means exhaustive–provides a glimpse of how the power such entities possess to influence if not determine popular memory and what respectable institutions deem to be the historical record. 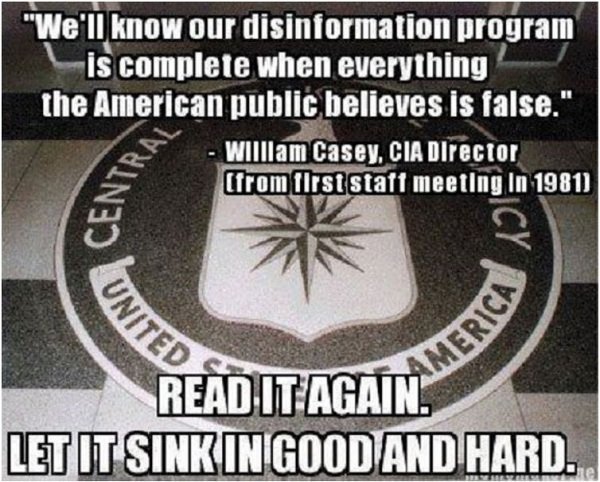